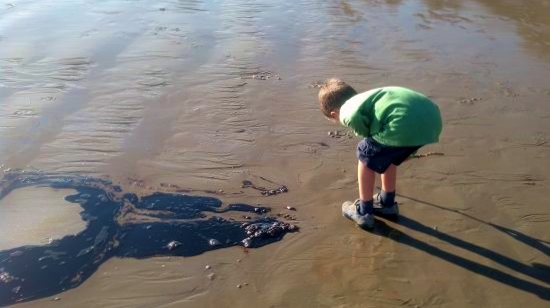 As many locals know, the Central Coast was home to one of the largest oil booms in our nation’s history beginning in the late 1800s. Back then, once oil wells and other infrastructure had reached their useful life, they were often abandoned with slapdash techniques. We have several of these poorly-abandoned “legacy wells” along our coast which leak significant volumes of oil, particularly in the Summerland area. The Becker Well, located in the surf zone on Summerland Beach, is the worst offender, often causing overwhelming odors, sheens on the water, and a thick oily “mousse” on the beach.

Fortunately, thanks to advocacy by Channelkeeper, other environmental groups, concerned citizens, and elected officials, the State Lands Commission (SLC) is now investigating the Becker Well and designing a plan to properly re-cap it, and funds for this important work have been included in the State budget.

State Senator Hannah-Beth Jackson (D-Santa Barbara) has championed legislation to help monitor and properly cap the 200+ legacy wells along the California coast. Senate Bill 900, the Coast Oil Well Cleanup Act, would require the State Lands Commission to plug old oil wells “orphaned” by oil companies that go out of business and cease to be held responsible. It would also require an in-depth study of similarly abandoned and unused oil wells along the California coast.

SB 900 has passed through the Legislature and is now headed to the Governor’s desk. Please click here to email Gov. Brown and urge him to sign SB 900 into law. You can use or draw from the text below as a template for your email.

I am writing to urge you to sign Senate Bill 900 (SB 900), which will address a major source of oil pollution on California’s beaches.

There are estimated to be more than 200 abandoned oil wells off the California coast, many of which are leaking and polluting our beautiful beaches, threatening public health and damaging wildlife and our beach-based economy. Most of these legacy wells are located along Summerland and Ellwood beaches in Santa Barbara County, which are heavily used and enjoyed by the public.

SB 900, the Coast Oil Well Cleanup Act, would require the California State Lands Commission to plug old “orphaned” oil wells in California waters. It will also require an in-depth study of similarly abandoned and unused oil wells along the California coast; removal of coastal hazards; and monitoring and research of natural oil seeps, which are a major source of oil on Central Coast beaches.

I urge you to sign SB 900 to protect California’s beaches and the people, businesses and wildlife that depend on them.