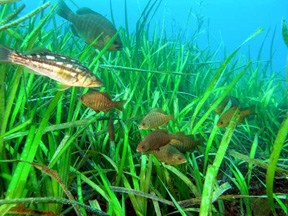 Seagrass beds are regarded worldwide as one of the most productive marine habitats. They act as nurseries for many common sport and game species but are easily harmed by sedimentation, coastal runoff and pollution.

Two types of seagrass are found along our coast – surfgrass and eelgrass. Both are true-rooted, flowering marine plants that require sunlight for photosynthesis, though they live in the marine environment. Although these two plants look similar superficially, they are adapted for different types of habitat. Surfgrass grows on rocks and is found in high-energy near-shore environments, such as tidepools and the surf zone. Wider-bladed eelgrass grows in sandy sheltered areas, where there is adequate protection from waves and storms. In much of its range, eelgrass grows in shallow bays and mudflats, but within the Santa Barbara Channel, eelgrass beds are entirely subtidal.

Although many eelgrass beds have been highly disturbed by decades of human activity, eelgrass has also suffered major declines due to natural causes in pristine waters. For example, extensive eelgrass meadows at the Channel Islands were eliminated by white urchins after the 1983 El Niño and have not recovered.

In partnership with the Channel Islands Research Project and the Partnership for Interdisciplinary Studies of Coastal Oceans (PISCO) at UCSB, Channelkeeper successfully restored eelgrass beds at the Channel Islands and spearheaded numerous subtidal monitoring projects to collect and disseminate important data useful for the protection of eelgrass habitats in the Channel. Channelkeeper also produced and distributes a brochure about eelgrass in the Santa Barbara Channel to raise awareness about this important habitat and to help boaters and other ocean users help us protect it.

In 2010, we completed a research and monitoring project to survey and map the major eelgrass beds in the Santa Barbara Channel and assess their role as critical habitat for marine life. We produced a comprehensive report along with detailed maps of each bed in order to inform boaters, divers, fishermen and others of the specific locations and extent of this sensitive habitat so they can help minimize detrimental impacts from anchoring and other activities.

In 2011, Channelkeeper partnered with the National Marine Fisheries Service on a genetic study project, surveying and collecting samples of eelgrass populations offshore of the Southern California in order to better characterize the population structure, diversity and connectivity of eelgrass beds along the coast. This study not only provides a current and comprehensive understanding of where coastal eelgrass exists in Southern California, but is also invaluable for conservation efforts aimed at protecting this essential and unique marine habitat.