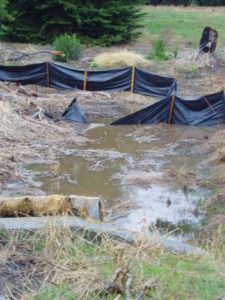 Thanks to Santa Barbara Channelkeeper’s vigilant monitoring and tenacious advocacy, soils contaminated with DDT and other toxic chemicals at Venoco’s Carpinteria Oil and Gas Processing Facility were finally cleaned up in 2012.

The clean-up plan that was implemented was the result of nearly a decade of negotiations between the Central Coast Regional Water Quality Control Board (RWQCB), Venoco, and Chevron Environmental Management Company (the former owner of the property). It began in 2000 when the RWQCB ordered Chevron and Venoco (the “responsible parties”) to begin addressing more than 30 water quality concerns on the property. The responsible parties responded with a litany of excuses, and thus began a pattern of recalcitrance that would characterize the responsible parties’ position on the necessary clean-up over the next several years. Finding their responses unacceptable, the RWQCB followed up with Clean-up and Abatement Orders in 2002 and 2004 and a Notice of Violation in 2006, but the responsible parties continued to flout their enforcement efforts and push back against a comprehensive clean-up.

That’s when Channelkeeper got involved. The matter was brought to our attention by vigilant neighbors concerned about the threats to public health and the environment posed by the contaminated property. Toxic compounds present in the soil included DDT and other chlorinated pesticides (from historic agricultural use of the property) as well as heavy metals such as lead, arsenic and zinc (from sandblasting activities associated with oil production at the site). The site’s proximity to a residential neighborhood, a harbor seal rookery, a public park and the ocean, as well as the responsible parties’ intractability and the RWQCB’s inability to enforce a timely clean-up of such dangerous contaminants are what drove us to take this project on.

Channelkeeper bird-dogged the development of the clean-up plan for four years. We filed Public Records Act requests and reviewed thousands of pages of technical documents pertaining to the contamination and various clean-up options, as well as internal memos and notes from meetings between RWQCB staff and the responsible parties. It became clear to us that the responsible parties were unwilling to do any more than a partial and inadequate clean-up and that, absent any vocal opposition and intervention by public interests, the RWQCB would likely have accepted such.

In addition to our research, Channelkeeper also collected water and soil samples, which showed elevated levels of contaminants, and we documented failing erosion control measures at the site. We submitted extensive comment letters and testified several times before the RWQCB, the City of Carpinteria’s Environmental Review Committee and Planning Commission, advocating for a stronger clean-up that prioritized the protection of people’s health and the environment rather than the pocketbooks of Venoco and Chevron.

Our advocacy was successful in securing significant improvements to the remediation plan, and the end result was the final adoption of a plan in 2010 that is stronger than that required at any DDT-impacted site in the entire nation. The clean-up was completed in early 2012.