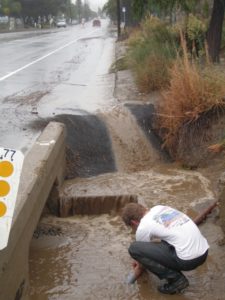 Aera Energy is an oil and gas company who currently operates a facility that covers approximately 4,300 acres of land in the lower Ventura River watershed. In 2009, Channelkeeper began monitoring the condition of stormwater runoff from the facility. Our monitoring efforts, highlighted in Episode 1 of The Watchdog Diaries, revealed alarming levels of fine sediment contamination in the runoff, along with other indications of pollution.

Channelkeeper advocated for the incorporation of stronger stormwater pollution prevention requirements in Aera’s stormwater permit. We have since engaged in a dialogue with Aera to discuss steps toward a mutually acceptable, enhanced stormwater management program for the sprawling facility. Aera has already made improvements which go above and beyond those required by its existing permit, and the condition of runoff from portions of the facility has improved. However, Channelkeeper believes that significant improvements still need to be made, so we are continuing our monitoring and advocacy efforts and discussions with Aera to that end.