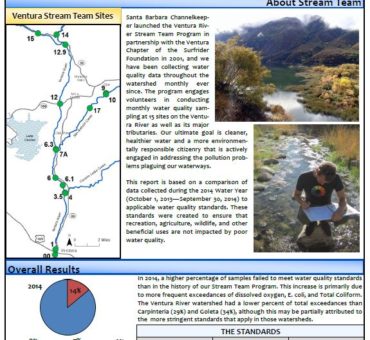 Channelkeeper has released Ventura and Goleta Stream Team Data Reports for the 2014 water year. The reports summarize our Stream Team water quality data from October 2013-September 2014 and compare the data to applicable water quality standards. In both the Ventura River and Goleta Valley watersheds, a higher percentage of samples failed to meet water quality standards in 2014 than ever before in the history of our Stream Team Program (which we launched in 2000). Each report also focuses on a particular prominent issue in the watershed during that year – impacts of channelization in Goleta, and low flows on the Ventura River.