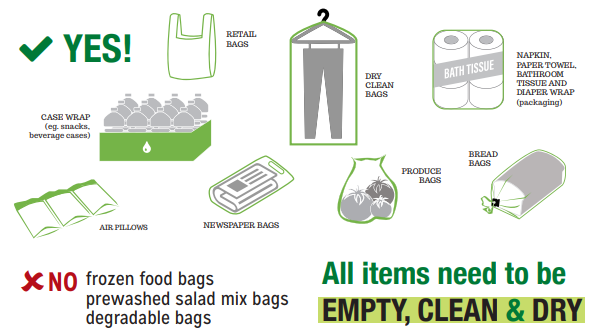 Film plastics are items like plastic shopping bags, bubble wrap, shipping “air pillows,” and the thin plastic bags used to contain bread, produce, and newspapers. Most recycling brokers no longer purchase film plastics, which means consumers typically don’t have a choice but to throw them away.

As a dry cleaning business, Ablitt’s ends up using quite a number of single-use plastic clothing sleeves. Owner Sasha Ablitt was frustrated by the waste, and after doing some research, she found a company willing to take her bags and turn them into pellets that could be made into products like outdoor decking and benches. She invested in a baling machine and for the past five years has been collecting in-house film plastic at her Gutierrez Street store.

In 2018 Ablitt’s invited the public to bring their household film plastics to the store as well, and has provided more than 3,000 pounds of plastic to their recycling partner!

In addition to the Ablitt’s drop-off at 14 W. Gutierrez St., community members can now also drop off their film plastics to CEC at 26 W. Anapamu St., 2nd Floor (near Chapala) or to SBCK at 714 Bond Ave. (near Milpas) between 9 a.m. and 5 p.m., Monday through Friday. Click here to download CEC’s printable PDF of which film plastics you can and can not recycle.