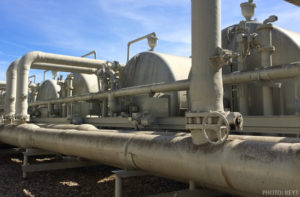 Help protect marine life in the Santa Barbara Channel by testifying at a public hearing this Thursday, January 29 at 9am on the 4th floor of the Santa Barbara County building (105 E. Anapamu St.). At the request of the City of Santa Barbara, the Central Coast Regional Water Quality Control Board (RWQCB) has proposed a permit amendment to allow the City to draw seawater into its desalination plant through an open ocean intake. Channelkeeper has been lobbying for an investigation of the feasibility of drawing seawater into the desalination plant through a subsurface intake instead. Open ocean intakes kill billions of marine organisms, whereas subsurface intakes virtually eliminate marine life mortality.  The State Water Board is about to adopt a new policy to require every new and expanded desalination facility in California to utilize a subsurface intake as the environmentally superior technology unless it is adequately demonstrated to be infeasible. The California Water Code requires that desalination facilities use the best available site, design, technology, and mitigation measures feasible to minimize the intake and mortality of all forms of marine life. The RWQCB failed to certify that the City complied with this requirement when it first permitted the desalination plant in 1991, so they are now seeking to make a retroactive determination of compliance so that the City can begin operating the facility again with the outmoded and environmentally harmful open ocean intake. Please stand up for marine life in the Santa Barbara Channel by testifying at the RWQCB hearing on January 29. Here are some talking points: THANK YOU for speaking out to hold the RWQCB and the City accountable for their duty to protect marine life! Additional information:
© 2020 Santa Barbara Channelkeeper | Website by Mission Web Marketing
NAVIGATION