California’s Central Coast was home to one of the largest oil booms in our nation’s history beginning in the late 1800s. Back then, once oil wells had reached their useful life, they were often abandoned with slapdash techniques. While natural seeps are present in the Santa Barbara Channel, several of these poorly abandoned “legacy wells” leak significant volumes of oil, particularly in the Summerland area. 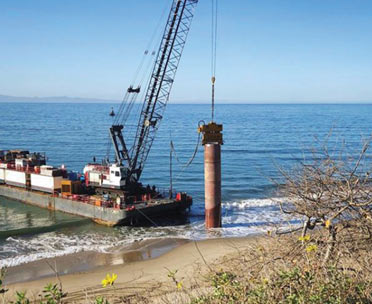 In 2016, the California State Lands Commission identified 198 abandoned oil wells located off the Santa Barbara coast. Many of the abandoned wells may be leaking oil that pollutes our beaches, threatens public health, jeopardizes wildlife health and habitats, and negatively impacts our beach-based economy. Most of these legacy wells are located along Summerland and Ellwood beaches in Santa Barbara County, which are heavily used and enjoyed by the public.

The Becker Well, located in the surf zone on Summerland Beach, was the worst offender, often causing noxious odors, sheen on the water, and oil on the beach. In August 2015, conditions had deteriorated so significantly that the beach was closed for four days in order to protect public health.

Fortunately, thanks to advocacy by Santa Barbara Channelkeeper, other environmental groups, concerned citizens, and elected officials, the California State Lands Commission recapped and sealed the Becker Well in 2018.

In addition, State Senator Hannah-Beth Jackson (D-Santa Barbara) championed legislation to help monitor and properly cap the remaining legacy wells along our coast. Senate Bill 44, the Coastal Oil Well Cleanup and Remediation Act, enacted in 2017, requires the State Lands Commission and Division of Oil, Gas, and Geothermal Resources to plug old oil wells abandoned by companies that have gone out of business and can no longer be held responsible. It also requires an in-depth study of oil seepage in coastal waters to determine points of origin, seepage rates, and environmental impacts, as well as the development of a priority list of legacy wells to be remediated.