Trash is making its way into our oceans at an alarming rate, so Channelkeeper organizes frequent clean-ups that mobilize hundreds of volunteers every year to remove trash from our beaches and creeks and prevent it from polluting the Santa Barbara Channel. We track the amount, weight and types of trash we collect at our clean-ups in a database and use this information to inform
our monitoring and advocacy efforts. 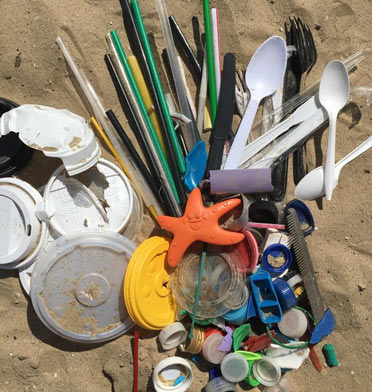 Channelkeeper officially adopted West Beach as part of the California Coastal Commission’s Adopt-a-Beach Program in 2006, so we host at least four clean-ups at West Beach each year, including on Coastal Clean-up Day every September.

We partner with the Channel Islands National Park, Marine Sanctuary and others to conduct clean-ups at beaches on the Channel Islands, and with the Santa Barbara Waterfront Department on its annual “Operation Clean Sweep” to remove sunken trash from the seafloor beneath the Santa Barbara Harbor. Channelkeeper was also instrumental in the multi-agency effort to address the massive trash epidemic from homeless encampments in the lower Ventura River.

Shortly before the first big rain event every winter, Channelkeeper surveys local creeks to identify trash accumulation hot spots and organizes clean-ups to remove trash before winter storms wash it down to our beaches and ocean.

Channelkeeper also hosts numerous clean-ups for youth and community groups and environmentally-minded businesses who want to rally their members or employees to make a difference.

Check out our events page for dates of upcoming clean-ups or contact us info@sbck.org to schedule a clean-up with your group.

In addition to picking up trash on land, every time we are out on our boat, we survey the Channel for marine debris and stop to pick it up as we go.

If you interested in learning more about our volunteer opportunities,
please call us at (805) 563-3377 or email us or use the contact form below.