In the late 1990s and early 2000s, warning signs at Santa Barbara beaches notifying the public that ocean water contained excessive levels of fecal bacteria were an all too frequent sight. To find out why, and we discovered that sanitary sewer overflows (SSOs) and leaking sewer pipes were a primary culprit. 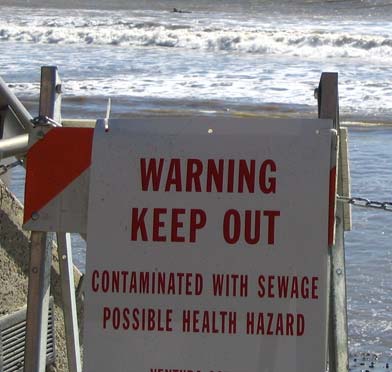 Sewage contains high levels of pathogens, toxic pollutants, nutrients, oil and grease, and can pollute surface water and groundwater, threaten public health, adversely affect aquatic life, and impair the recreational use and aesthetic enjoyment of our waterways. SSOs – which are illegal – can also damage property and result in beach closures, harming tourism and our local economy.

The City of Santa Barbara, like many cities across the US, operates a sewage collection system that is very old and deteriorating.  Unfortunately, the City failed to keep pace with this need, which caused the dangerously high number of sewage spills aboveground, as well as a chronic problem of “exfiltration” – leakage of sewage out of broken sewer pipes and into storm drains that lead to creeks and beaches.

For more than a decade, Channelkeeper sought to convince City leaders, through education, communication and advocacy, to address the serious problems plaguing its sewage system. The City applied a few band-aids, but failed to commit to the comprehensive solution needed to systematically fix the City’s old and leaking sewer pipes and stop the spills.

Therefore, in 2011 Channelkeeper filed a lawsuit in an effort to compel the City to increase its effort and investment in repairing and replacing leaky sewer pipes in order to stop the illegal flow of sewage to Santa Barbara’s creeks and beaches.

After nearly a year of negotiations, Channelkeeper and the City signed a legally binding settlement agreement in 2012 which required the City to spend an additional $4.5 million over the ensuing five years to improve its sewer system operation and maintenance practices, significantly reduce sewage spills, and nearly double the number of miles of sewer pipes it repairs and replaces, with a focus on those that have the highest risk of exfiltrating and contaminating downstream creeks and beaches. The number of SSOs decreased, but not enough, so we compelled the City to extend the settlement for an additional three years, through 2019.

As a result of Channelkeeper’s lawsuit, since 2012 the City has invested an additional $20 million to improve its spill response and reporting protocols, enhance sewer pipe inspection and cleaning efforts, and repair or replace 35 miles of sewer pipe (about 15 percent of its entire system), including 10 miles of pipes that had a high risk of leaking to storm drains, creeks and the ocean. The number of SSOs continued to drop, and in 2019 the City had only 3, the lowest number in decades, and down 93% from a high of 44 when we first commenced legal action in 2009. This massive improvement translates directly into less pollution to our creeks and beaches.