The Ventura River and the wildlife that rely on it are in serious jeopardy, and Santa Barbara Channelkeeper is leveraging the law to bring it back from the brink.
And we’re succeeding. 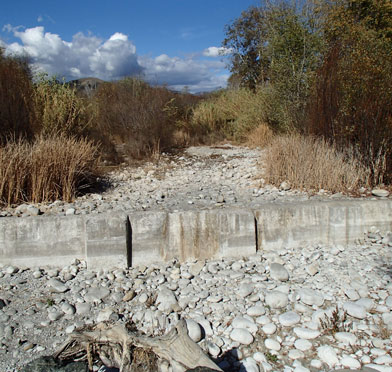 The City of Ventura pumps hundreds of millions of gallons of water from the Ventura River every year, often completely drying up parts of the river. The City is the biggest pumper in the watershed, and it has the most direct impact on flows in the “live reach” of the Ventura River, which historically flowed year-round from Casitas Springs to the ocean. The City’s unmitigated pumping at Foster Park is destroying endangered species habitat, degrading downstream water quality, and ruining public trust resources.

In an attempt to restore flows to the river, Channelkeeper filed a groundbreaking lawsuit in 2015 to challenge the City’s over-pumping as well as the State Water Board’s failure to do anything about it, despite its mandate to prevent the waste and unreasonable use of the state’s waters and to protect those waters as public trust resources.

Our legal and public pressure brought the City of Ventura to the negotiating table for the first time ever, and through a formal mediation process in 2019 that also included the State Water Resources Control Board and California Department of Fish and Wildlife and other parties that extract water from the river, we’ve secured binding commitments from the City to remove fish passage barriers in the river and to reduce or curtail its pumping from the river when flows fall below critical levels for an interim period until a longer term solution is developed.

The Department of Fish and Wildlife and State Water Board are currently completing scientific studies that will determine precisely how much flow is needed to protect steelhead. Channelkeeper will leverage the agencies’ studies in our continued negotiations with the City to secure a permanent solution that ensures sufficient flows in the river to sustain healthy steelhead and other wildlife while also meeting the community’s water needs in the future.

Protecting the Ventura River isn’t a question of choosing people over wildlife. That’s a false choice. There is enough water to satisfy the needs of people AND sustain nature. If managed sustainably, Ventura’s water resources can meet the needs of both people AND the environment. Truly sustainable water management would strike a balance between pumping water from the Ventura River to meet demand and leaving water in the river to sustain nature, fish, and recreation. But the needs of the river currently aren’t even part of the equation.

Explore the resources below to learn more about Channelkeeper’s efforts to protect the Ventura River from over-pumping and ways to show your support.

Timeline of Channelkeeper’s Legal Action to Restore Flows to the Ventura River
It’s Not About a Fish – March 7, 2020 OpEd in the Ventura County Star
January 2020 Letter to Water Rights Holders