Since 1965, Halaco Engineering Company operated a scrap metal recycling facility located adjacent to the Ormond Beach Wetland in Oxnard. The facility melted millions of pounds of magnesium and aluminum into ingots for use in manufacturing and die-casting, and discharged over one million gallons of contaminated wastewater into unlined settling ponds every month. The wastewater was contaminated with copper, lead and other heavy metals, ammonia, and several radioactive isotopes. Solids that settled out of the wastewater were piled onto a slag heap that grew to cover 26 acres and tower 40 feet above the beach. 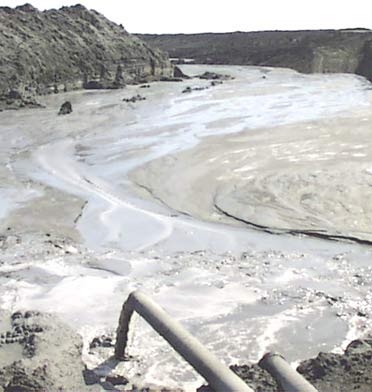 The company had been cited repeatedly by regulatory agencies for releasing carcinogens into the air, leaking contaminated water into the wetland, and dumping radioactive material into the slag heap. However, Halaco refused to clean up its act.

In 2001, Channelkeeper and the Environmental Defense Center filed suit against Halaco in an effort to force the company to clean up its mess. Halaco tried everything to evade our lawsuit, including attempting to have our suit dismissed, filing a bogus trespass lawsuit against Channelkeeper’s Executive Director, and filing for bankruptcy. These efforts failed to deter us.

After years of haggling, Halaco finally agreed to a settlement with Channelkeeper and EDC. The settlement required Halaco to cease discharging contaminated wastewater to the settling ponds, stop adding solid waste to the slag heap, implement stormwater runoff control measures, and install air pollution monitoring and control technology. The settlement also required Halaco to hire a consultant to monitor the company’s compliance and to submit to random sampling of its air emissions.

The latter point proved to be Halaco’s death knell. Air emissions testing conducted in 2004 revealed that the notorious polluter was exceeding the limits of its air pollution permit. Because the company was in bankruptcy, it could not afford to take the measures necessary to come back into compliance, and Halaco was forced to permanently cease operating in September 2004. While this was a major victory for the community as well as Ormond Beach, Halaco’s legacy lived on in the 40-foot high mountain of toxic slag it left behind.

In 2006, EPA finally stepped in to remove the most immediate environmental threats and conduct an in-depth assessment of the contamination at the site. EPA’s sampling confirmed extensive contamination at the facility as well as in the adjacent beach, wetlands and underlying groundwater. As a result, in 2007 EPA added the site to the Superfund National Priorities List, which is reserved for the nation’s highest priority hazardous waste sites.

Since then, EPA has undertaken various measures to remove some of the most hazardous waste, stabilize the slag heap to reduce stormwater runoff and erosion, and determine the nature and extent of the contamination through extensive sampling. The agency is evaluating the feasibility and cost of using Halaco’s wastes as a raw material in the production of cement and conducting an ecological risk assessment, and will then release a proposed clean-up plan for public comment. The timeline is uncertain but will undoubtedly be several years, and the clean-up is likely to cost tens of millions of dollars.

In our ongoing efforts to secure a timely and thorough clean-up of the Halaco site, Channelkeeper is working to ensure that the local community understands and participates in the complex and highly technical Superfund clean-up process, and that their concerns and desires regarding the clean-up and future uses of the site are considered by EPA when making decisions about the final remedy for the mess Halaco left behind.