On Tuesday, May 19, 2015, an onshore pipeline owned by Plains All American Pipeline ruptured, spilling an estimated 143,000 gallons of crude oil onto the Gaviota Coast, one of the last remaining stretches of pristine undeveloped coastline in California. At least 21,000 gallons spilled into the Santa Barbara Channel. 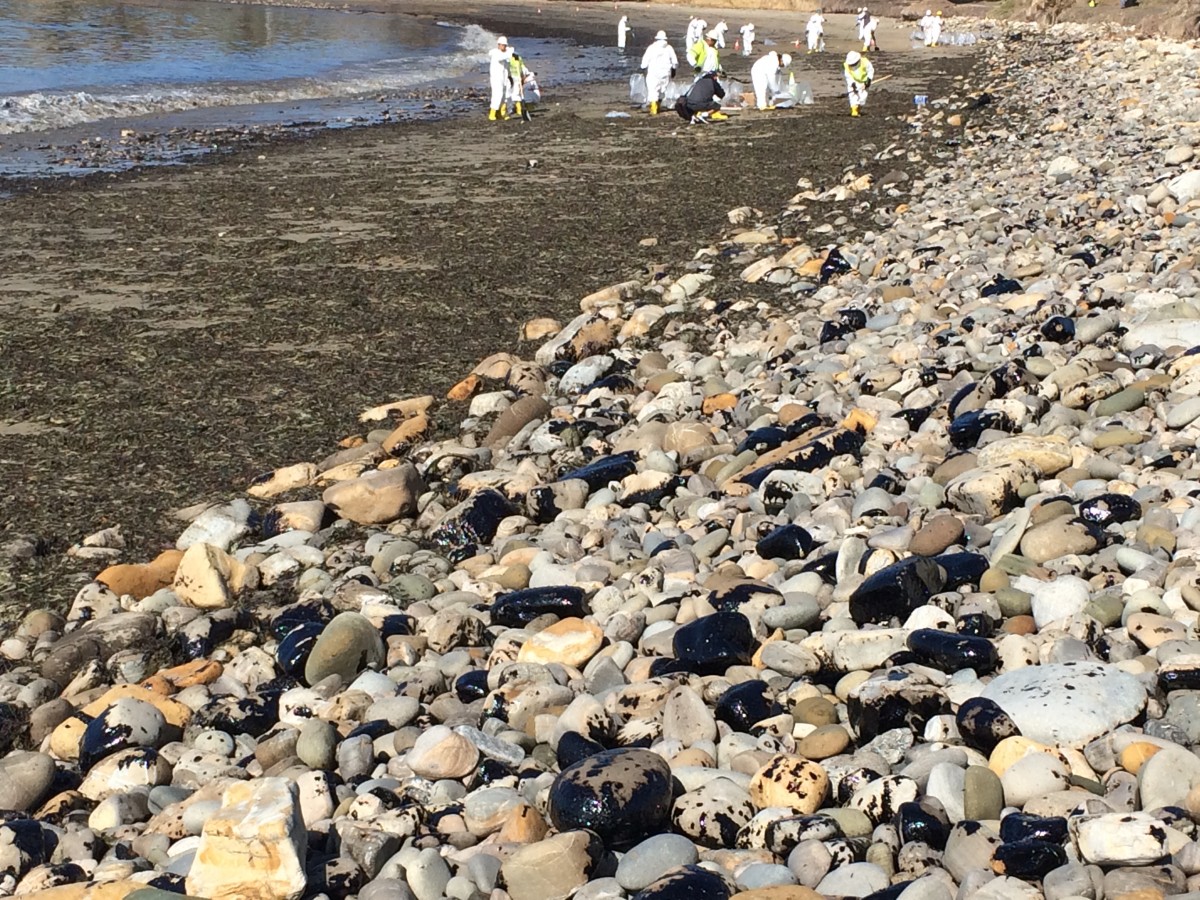 This environmental disaster has taken and will continue to take a terrible toll on the environment, wildlife, the local economy, and our community. It killed or injured hundreds of birds, marine mammals and fish, forced the weeks-long closure of Refugio and El Capitan State Beaches and 138 square miles of fishing grounds, fouled more than 40 miles of shoreline, and negatively impacted local businesses, tourists and residents.

Santa Barbara Channelkeeper rose swiftly to the challenges posed by this crisis, working tirelessly since day one to investigate the circumstances behind the spill, monitor the environmental impacts, keep the public informed, and advocate for policy reforms to help prevent a disaster like this from happening again.

In the immediate aftermath of the spill, Channelkeeper was out on our boat, up in airplanes, and on the affected beaches bird-dogging the response, monitoring the extent of the spill and photo- and video-documenting impacts on the water, shoreline and wildlife. We conducted underwater surveys at the nearby Naples Marine Protected Area (MPA) and the kelp forest and eelgrass bed at Refugio, and collaborated with researchers from Cal State Channel Islands to deploy underwater ROVs to scout for oil on the seafloor.

Then, as tar balls started washing up on beaches in Ventura, LA and Orange counties, we quickly created an online reporting form for people who observe oil on beaches to fill out and submit to us. We compiled these observations and cultivated relationships with key officials inside the Unified Command to ensure that our reports were informing the official clean-up. At the request of the California Department of Fish and Wildlife’s Office of Spill Prevention and Response (OSPR), we also incorporated oil observations into our MPA Watch Program, and we’re contributing those data to OSPR as well.

The existence of profuse natural seeps in the Santa Barbara Channel has confounded the spill response effort, with the ability to differentiate tar balls attributable to the Refugio spill from seeps emerging as a key challenge. So, at the urging of Channelkeeper and our allies, OSPR and the US Coast Guard organized an intensive monitoring effort to survey and collect tar ball samples on beaches from Gaviota to Huntington Beach, which were then fingerprinted to determine their origin. Channelkeeper represented the environmental community in this effort. We are now developing a more systematic, long-term monitoring program to record standardized tar ball data on beaches along the Santa Barbara Channel on a seasonal basis in order to establish a baseline that can be used to differentiate spills from natural seeps as well as to help identify new spills in the future.

In addition to these monitoring efforts, Channelkeeper has been collaborating with other environmental groups, businesses and policy makers to advocate for a thorough clean-up, necessary policy reforms to improve spill prevention and response, and stringent enforcement against Plains. We testified at hearings before several local and state agencies, and have been a lead supporter of a package of bills introduced in the California Legislature in the wake of the spill to improve oil spill prevention and response.

The clean-up of the spill is now largely complete – although only about 10-20% of spilled oil can be recovered once it gets into the ocean – and the longer term Natural Resource Damage Assessment (NRDA) has begun. The NRDA will ultimately determine the amount of money Plains must pay to mitigate the damage caused and what restoration projects that money should support to restore the impacted resources, and Channelkeeper will track and weigh in as this process as it unfolds.

Finally, Channelkeeper continues to serve as a go-to source of reliable information for the media and the public. We’ve conducted scores of interviews with reporters to give a credible environmental perspective, gathered and disseminated extensive photo and video footage from unique aerial and on-the-water vantage points, and kept the public informed through social media. We are also planning a series of public lectures featuring relevant agency officials and scientists to speak about various topics related to the spill and oil issues in our region more broadly.

This tragic spill has served as a crude reminder of just how vulnerable our environment is to the inherent risk of oil spills, and how much our community, wildlife, and our local economy depend on a clean, healthy ocean. Channelkeeper is committed to continue lending our unique skills and resources to the ongoing response effort and to doing all we can to help ensure this kind of disaster never happens here again.

Click here for Channelkeeper’s fact sheet on the spill.

Click here for information on Channelkeeper’s “After the Spill” speaker series.

Click here for a fact sheet on Plains All American Pipeline’s history of environmental violations.

For photos, videos and live updates from Channelkeeper via land, sea, and air, visit our Facebook and Twitter pages.

If the spill has directly impacted you and/or your business, you can submit a claim to recover personal and business losses by calling (866) 753-3619 and clicking here.