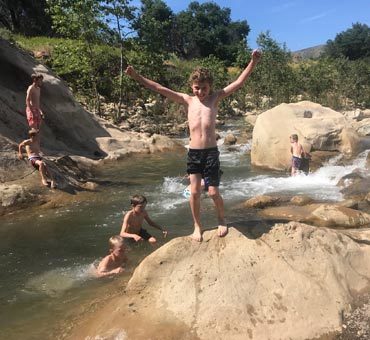 I arrived at work this morning to a voicemail on my phone. An angry caller shouted from the recording: “I’m 67-years old, and I’ve worked in there [Thatcher Creek] since my late teens. I’ve never seen one,” said the caller, referring to endangered steelhead trout. “We’re lucky if we even have water in Thatcher Creek.”

The caller was referring to Channelkeeper’s lawsuit, which the organization filed in 2014 in an attempt to compel the State Water Resources Control Board to analyze the City of Ventura’s use of water from the Ventura River and to intervene to prevent the City from completely drying up the River by pumping too much water from its Foster Park well field.

It’s worth noting that various government agencies brought this problem to the City’s attention decades ago, but the City chose to ignore, or worse, deliberately evade remedies. Channelkeeper’s lawsuit focused solely on the City’s water use because of its disproportionate impact on the river, but the City chose to pull every other water right holder in the Ventura River watershed into our lawsuit to protect and prioritize its water right.

Some community members, including the gentleman that left the voicemail, are frustrated because the City of Ventura opted to challenge their water rights, and view Channelkeeper’s efforts as misguidedly focused on a single species of fish, the endangered steelhead trout, which is currently struggling for survival in the Ojai and Ventura River valleys.

Channelkeeper’s efforts in the Ventura River watershed are about protecting much more than steelhead, but it’s easy to understand why so much attention is placed on the beleaguered species. One of the reasons that Southern Steelhead are endangered is that they require high quality habitat, which is hard to find these days. That means that if a river is good enough for steelhead, it’s probably good enough for everything else that lives there as well. So, when you protect steelhead, you protect an entire ecosystem. As a keystone indicator species, steelhead deserve the attention they garner.

Another reason that steelhead are so famous is that many of our environmental laws are designed to prioritize protection of endangered species. Many of our nation’s protected and cherished open spaces were established in one way or another to protect sensitive keystone species. But the Ventura River is much more than a haven for an endangered fish.

The Ventura River is the wilderness in our own backyard. It’s an entire interdependent ecosystem of birds, fish, mammals, and more that existed for millions of years before humans inhabited the area. That is something worth protecting.  To the first humans that lived here, the Ventura River was a sacred source of life and abundance. It remains so to those people today, and that too is worth protecting.

For several generations in the not so distant past, the Ventura River was a cherished source of sustenance and recreation. Each street off Ventura Avenue had its own dirt trail at the end of it leading down to the river, where the community accessed swimming holes and fishing spots, each with its own name, names now largely forgotten. But the river still provides recreational opportunities and local access to nature for thousands of community members today, and that too is worth protecting.

The Ventura River is also a source of drinking water, which we also need to protect. Whether diverted from the surface or pumped from just beneath it, the river and its groundwater basins provide all of the water used in the Ojai Basin and the Ventura River valley. When the river goes dry, it’s a canary in the coal mine telling us that we are exceeding the capacity of our resources, living beyond our means, and spending over-budget in ways that are detrimental and unsustainable. A thriving river means a sustainable future, and that is worthy of protection.

The Ventura River is also our legacy. It’s the home that we will pass on to our children. It’s our own backyard. In this day and age, for all the attention placed on global environmental problems we have no means to control, we can control what we do in our own backyard. We can choose to protect it. If we don’t, who will?

That’s why Channelkeeper is taking a stand for the Ventura River. It’s not just about a fish.