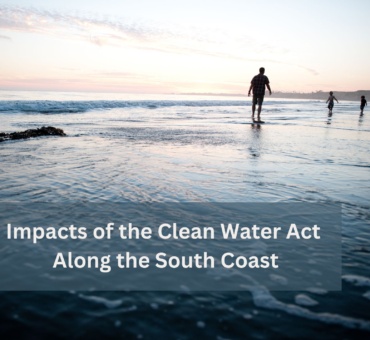 Clean water is central to our identity and way of life on the South Coast. The health of our ocean—and the creeks, rivers, wetlands, and watersheds that flow into it—directly affects our community’s health and happiness, our economy, and the ecological richness that makes this place so unique.

This month, we’re celebrating the 50th anniversary of the Clean Water Act, which has played an important role in improving the water quality of the Santa Barbara Channel and its watersheds, as well as waterways across the nation.

Before the Clean Water Act, only one-third of America’s waterways were considered clean enough to be fishable or swimmable. Many of our nation’s waters were contaminated by sewage, oil, trash, industrial pollution, and agricultural runoff.  Rivers in some areas were so polluted that they caught on fire. In response to public outcry, in October of 1972, Congress passed the Clean Water Act to address water quality issues by regulating the amount of pollutants discharged into our natural water systems and establishing national standards for water quality.

The Clean Water Act represented a milestone in our nation’s environmental history. It took significant steps to stop dumping raw sewage and untreated industrial waste into our waters. It set a goal to restore and maintain the chemical, physical, and biological integrity of the nation’s waters for the use and benefit of everyone. It also gave every person the right to enforce the law when the government fails to protect clean water.

Since then, Channelkeeper and other Waterkeepers across the United States have used the Clean Water Act to stop pollution, to prevent habitat destruction, and to set water quality standards that ensure our waterways are healthy for both wildlife and people to use and enjoy.

In fact, the Clean Water Act forms the backbone of Channelkeeper’s work. In 1999, Santa Barbara County had the highest number of public health warnings for poor water quality of any coastal county in California. Since then, Channelkeeper has leveraged the Clean Water Act to improve water quality along the South Coast by motivating polluters like Halaco Engineering Co., the Ojai Quarry, and Southern California Edison to clean up their operations. We have also used the Clean Water Act framework to effect policy changes to better protect our community from sewage overflows, industrial pollution, and agricultural discharges.

There is still work to be done to defend our community’s right to clean water and healthy habitats, but we hope you’ll join us in honoring the 50th anniversary of a law that has improved the health and safety of the ocean, creeks, wetlands, and rivers that we love and continues to help keep our waterways, wildlife, and community vibrant.