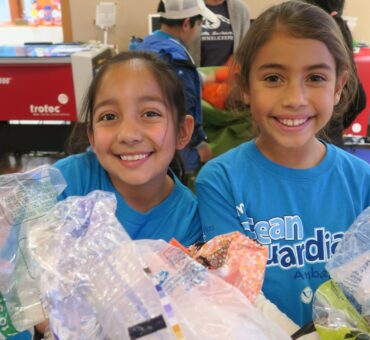 Many recyclers don’t accept film plastics because the material is often contaminated or torn in the recycling bin, thereby losing its value. Film plastics such as plastic bags also tend to jam up sorting conveyor belts at recycling facilities, causing the machines to be shut down.

However, Santa Barbara has a vibrant film plastics recycling program that was launched by Sasha Ablitt, owner of Ablitt’s Fine Cleaners. After taking over her family’s dry-cleaning business, Ablitt noticed the mounting plastic waste that the company was generating from single-use garment bags, and she was determined  to find a more environmentally friendly solution. She discovered a handful of companies that accept bags and convert them into plastic pellets. She began gathering film plastic and purchased a machine to bale and compress it before sending on for recycling. The film plastic is picked up by a company called Trex, that melts it down and mixes it with virgin plastic to create home and garden products, including outdoor decking materials.

In 2018, after several years of recycling her business’s film plastic, Ablitt realized the program could also serve as a collection site for the public. Santa Barbara Channelkeeper and the Community Environmental Council (CEC) partnered with Ablitt’s Fine Cleaners to provide additional support and create more public drop off centers. Channelkeeper and CEC—with the help of volunteers—hand-sort the plastic and perform quality control checks to ensure that the materials are high-quality and able to be recycled.  Since this program became open to the public, 12,000 pounds of film plastic have been recycled.

From now on, there will also be training requirements to participate in the program, in order to avoid sorting errors and contamination issues. Community members will now have to sort their own film plastic with a trained volunteer or staff person, and will have to take home any plastic waste that is not accepted for recycling. We greatly appreciate everyone’s efforts to recycle and your commitment to doing it properly.

What you can recycle:

Another tip that a community member shared with us that has helped with the sorting is to keep plastic that you weren’t sure if it is accepted in a separate bag from all the good clean and dry film plastic.

**April 2021** Channelkeeper has resumed film plastic collection at our office.

Please note that all drop off locations are now available by appointment only. Please email Penny@sbck.org if you would like to schedule a drop-off at Channelkeeper’s office. To sign up to receive info about film plastic collection events at Ablitt’s, please visit https://ablitts.com/filmplastic/. We are also asking community members to come prepared to sort their own film plastic with a staff or trained volunteer and to take home any plastic not accepted.