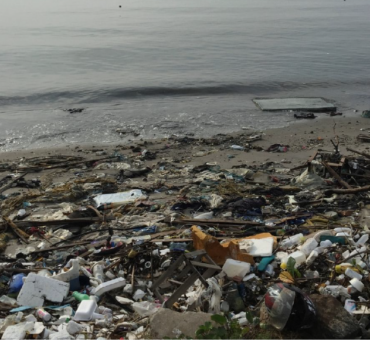 On a morning walk last week, I picked up a half-buried candy wrapper on the beach. The plastic film and blue lettering seemed so out of place against the sand. I wondered: how had it ended up here?

I imagined that someone was hungry and bought a convenience store snack. They may have put the wrapper in their pocket, intending to throw it away later. Perhaps it fell out before they could. Blown by the wind, it found its way into a gutter or storm drain, and rainwater carried it through the network of storm pipes into streams. Eventually, the wrapper ended up in the ocean.

Santa Barbara has an elaborate network of storm drains that carries water away from urban areas (page 8), but the stormwater it conveys is not filtered for debris or treated before it enters the ocean. Runoff from irrigation, residential car washing, and sidewalk and parking lot washing can pick up pollutants and carry them through storm drains and waterways to the ocean.

In 2011 the City of Santa Barbara installed screens in front of storm drains in order to catch trash and other debris from finding their way into the water system. However, these screens retract during times of rainfall to prevent flooding, allowing debris that has collected to enter the drains.

Each year, 5 to 14 million tons of debris flows into the ocean from coastal areas. Not only can it be toxic to aquatic wildlife and humans, this pollution degrades the water quality and also destroys the beauty of our oceans and beaches that we swim and play in.

Plastic doesn’t biodegrade in the ocean like natural materials do. Once in the ocean, UV exposure, weather, and heat cause the plastic debris to break down into smaller and smaller pieces, known as microplastics. These microplastics cannot be easily removed because they become so small. Fish and other marine life may ingest the plastic pieces, blocking their digestive tracts and changing their eating habits, which can influence their growth and reproduction.

Toxins and pollutants can bind to the surfaces of microplastics. When these tiny pieces are ingested, they can spread toxic chemicals throughout the food chain. Researchers have also found that smaller particles, or nanoplastics, can permeate tissues and organs, and affect a variety of species when small creatures are consumed by bigger fish and mammals, including people.

A recent study revealed that the rate of plastic consumed by fish has doubled within the last decade and is increasing by more than 2% each year. Two-thirds of the species that had ingested plastic were species that are commercially fished, indicating that human consumption will likely increase in parallel.

These microplastics can be found all over the ocean, including in the deep sea, and frozen in Arctic sea ice. It’s estimated that 269 thousand tons of plastic are floating in the ocean, with more being added every day.

Statistics such as these underscore the importance of responsible litter disposal. They serve as a reminder that each of us can take steps to help keep plastic waste out of storm drains and prevent it from entering our oceans. We can choose to be part of the solution–one candy wrapper at a time.

How you can help: